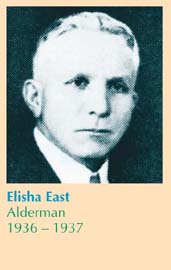 Elisha East was born in Bolton, Ontario and moved to Edmonton in 1910 where he became a contractor. He moved into this house in 1927 and remained until 1942.

East became a prominent citizen through his career as a politician and as an active community member.

Committed to the ideals of the social credit philosophy that swept through the province during this period, East worked to bring those ideas to life at the provincial, municipal, and community level.

He ran as an aldermanic candidate several times on the Social Credit ticket. This was one of only two provincial political parties which attempted to run candidates at the municipal level. The other being the Co-operative Commonwealth Federation (the CCF was the forerunner to today’s NDP).

East was elected in 1935 and remained on council until 1939. His brother, James East, was also on council, making them the only brothers to hold seats at the same time.

East was the president of the Alberta Social Credit League for a period, and founded the Alberta Avenue Community League in 1922.