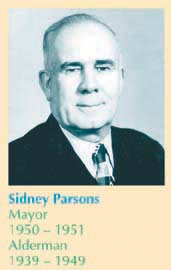 Built in 1927, this bungalow’s features are common design elements for the area and era. It is also telling of the modest character of the city and its leaders in the first half of the century due to its long-term association with former mayor Sidney Parsons.

Sidney Parsons was born in Revelstoke, England and moved to New Jersey shortly after the turn of the century. He attended technical schools there and began his business career in Bayonne, N.J. with Standar Oil Co. He moved to Edmonton in 1910 at the age of 17 where he began working as a bricklayer.

Parsons went overseas in the First World War with the 49th Battalion, being promoted from private to company sergeant major of “C” company. Upon returning, he became involved in the Ex-servicemen’s Association through which he organized unemployment programs during the Depression. This led him into the world of labour affairs, where he became well known in the city.

In 1937, Parsons ran successfully as an alderman and held that position until 1949, when he became mayor for two years before his defeat by William Hawrelak.

He and his family moved into this house after it was built in 1927 and remained there until 1952.

His success as a politician could be contributed in part to his association with the Citizens’ Committee political party, an almost forgotten part of Edmonton’s history which ruled Edmonton for the better part of four decades.

From 1934 to 1960, 87.5 per cent of successful candidates came from the Citizens’ Committee slate. They were not necessarily the elites of the city, but were, as George M. Betts described them, a “ status quo group.”

It existed to ensure the right people were elected – “people who could be trusted to run the city in a businesslike fashion and make sure the interests of business were served. Among other things, this translated into professional management at city hall and an emphasis on public works as opposed to social programs.”

Heavily involved in the Labour movement, Parsons was a tenuous fit with the Citizens’ Committee. The party was happy to support labour candidates provided they were willing to support the business goals of the committee.

Through his run as alderman he remained with the party, but in 1949 he ran for mayor as an independent. This coincides with the time when the Committee had become complacent and allowed the forces of labuor to hijack the party.

They tried to regain control by ejecting labour candidates but the party was fully taken over when William Hawrelak became the Mayor under its banner. The party name was abandoned, but the goals remained and were reformed over the following decades.