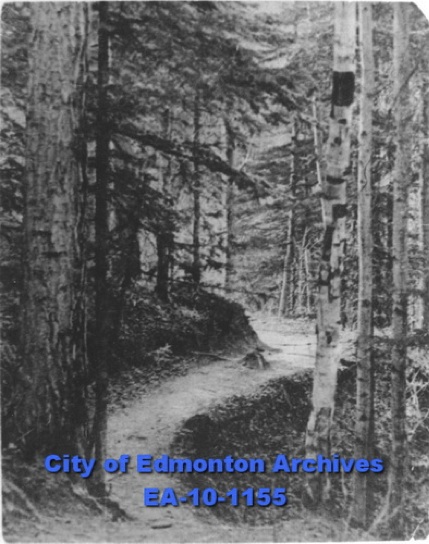 When Norwood School was originally built, the city surrounding it was still in its infancy. Wagon trails and bushes along with a scattering of start up businesses and residential development led away from the school.

Rat Creek ran south of the school grounds where Norwood Boulevard (111th Avenue) runs today. Looking to the southeast, one can still see how the land falls away. The creek was filled in by McDougall and Secord, the land developers, in an attempt to modernize the area.

The name originally came from two trappers who homesteaded the piece of land known as Viewpoint at the far east end of Jasper Avenue near Kinnaird Ravine, the name which replaced the rather unglamorous Rat Creek moniker. The trappers named the creek for the plentiful muskrat that lived along its reaches.

Most people do not think of muskrat when they think of the fur trade. Luxury furs such as beaver and marten were certainly the most lucrative as they fetched the highest prices, but by the 1900s such animals were becoming scarce, especially in highly populated areas such as Edmonton.

“The banks were not very high in front of the school, but a little further down stream a person could take a quick dip if no one was around.” H.O Palmer

In light of such scarcity, European and American furriers sought out cheaper substitutes such as mink, muskrat, and ermine, which were dyed and prepared for use in new fashions. By 1914 muskrat had replaced beaver as the highest volume fur produced in Canada.

Running in front of the newly established Norwood School, Rat Creek was a tempting place for an adventurous recess among school children. A guard was employed during high water times to keep an eye on children but not always successfully.