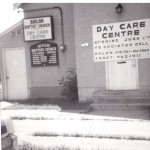 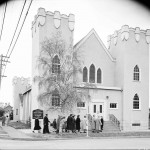 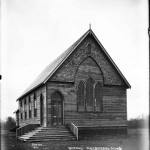 On August 19, 1906, Reverend C.A. Mitchell held the first service of the Erskine Presbyterian Church. The service began at 7:30 p.m. to a gathering of thirty six worshippers. By September, the attendance had risen to 51. The first baptism was held on September 12, 1906 for Fred Baron, the infant son of Mr. and Mrs. Baron. The first funeral was held September 23, 1906 for Beatrice Howlett, aged fourteen.

As the population of the area grew so did the church and plans quickly emerged for a new building to be constructed. On January 12, 1908 the new church opened for the first time. In his opening sermon, Reverend Dr. D.G. McQueen saw great promise for the future of the Church, asking “who has despised the day of small things?”

Alas, the great things would also see their end. While the Church grew throughout the first half of the century, the post-war period saw declining attendance throughout the area and in 1966 the Erskine Church amalgamated with the Norwood United Church and the building was sold to the Shiloh Baptist Church.

The Shiloh Baptist Church has roots that go back over a hundred years to some of the earliest black settlers in Alberta. In the early years of Edmonton, newly arrived black immigrants, largely from the United States, were not allowed in mainstream white churches and so they established Shiloh. It was a place where black people could find community, guidance and support. The Church has moved numerous times throughout its history and it left this location in 1997 to find a new home just north of downtown.