Posted by AveHistory in Articles, Businesses | No Comments 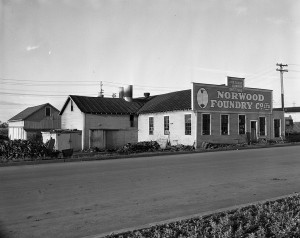 Norwood Foundry  was established in 1922 by Squire Hearn and many of his colleagues who came from the recently closed-down Western Foundry. Five years later, Hearn sold the operation to Ernest Buker, who ran Norwood for 50 years. In the early years most of the work was oriented toward agricultural products, such as cast iron cookers to prepare feed for pigs.

Throughout its history, Norwood expeditiously purchased other companies, operating some independently, streamlining and amalgamating others. During the years between the two world wars, Norwood ‘s main products were stove and furnace parts, agricultural castings and municipal castings for Edmonton. During the Second World War years, business began to boom and the company expanded. In 1946, Norwood bought out the Garvie Bolton Foundry and soon after purchased the Coutts Machinery Company Ltd.

In 1950, Norwood purchased the Edmonton Foundry, which meant it operated plants at three sites. In 1952, to streamline operations, the Garvie Bolton plant was closed and was amalgamated with the operation at 10054-79th Avenue. The two Norwood plants produced cast iron castings along with brass and aluminum. In 1956, one plant was dedicated to non-ferrous (aluminum and brass) work while the other did cast iron work.

In 1978 a new plant was built in Nisku. The modern facility produced castings in high-alloy irons, which were melted in electric induction furnaces. The thriving Alberta oil industry was a primary market for Norwood products. At the same time, the company produced and sold virtually all the castings required for the waterworks industry, including hydrants, valves, plastic pipe, valve castings, and sewer castings. The largest single iron casting was a 4,500 lb. drop ball for the Syncrude Oil Sands Plant.

In 1992 the company built a new addition to the Nisku plant which merged with the older shop. This streamlining led to the closure of the original operation at 111th Avenue and 91 Street. In 1992, when Norwood Foundry closed up its 70 year old facility at 91 Street and 111th Avenue in Edmonton the event was headline news. The venerable patchwork of a building was no architectural wonder, said one local historian, but its closing represented the passing of an era. Gone was the coke-fired cupola, replaced by new computer-controlled furnaces at the company’s headquarters in Nisku. The non-ferrous plant on 79th Avenue remains a highly successful operation.

Did anyone in your family ever work at Norwood Foundry? Tell us about it.