The Night and the Music: Skating Rinks

Posted by AveHistory in Articles, Community, Recreation | One Comment

Alberta Avenue plays a special role in the memories of anyone who grew up in the neighbourhood. The memories are rich, because on winter nights, the air was filled with the sound of music.
Hard as it may be to believe in 1995, there was a period in the life of the Avenue when one of the happier activities that filled a winter’s evening was skating. There were no indoor rinks, of course, other than the Gardens, or the Arena, as it was called, but every community had an outdoor rink. All across the city, skaters would gather at the rink, every night of the week, and skate for two hours. Usually the skating was accompanied by scratchy music played over loud speakers positioned around the ice. The music came from 78 rpm records played inside the rink shack, and there was a similarity between the records played all over the rest of the city. But the Avenue rink was different.

Twice a week, Saturday and Sunday evenings, the skaters would whirled around the ice to the sound of a live band. There was only one other rink in the city that offered this marvelous addition to the evening’s fun, and that was Central, the rink down on Jasper Avenue and about 112 Street. Throughout the week, the skaters at the Avenue had the same recorded music as the rest of the city rinks, but about half past seven on a Saturday evening, the rink staff would slide a small wooden hut out to the middle of the ice. This hut was open on all four sides, had canvas walls that dropped down if it was a windy night, and was just big enough to accommodate four musicians, all bundled up against a prairie winter night. 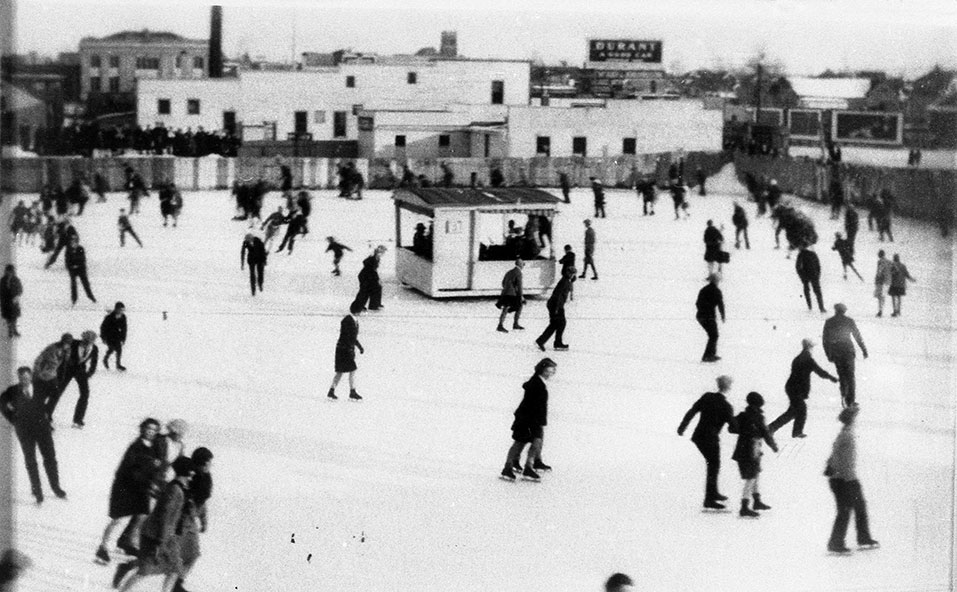 There was a small pot-bellied stove in one corner, a stove that fought a valiant and futile battle against a thirty below night. Then, at eight o’clock, the music started. Three marches, three waltzes, three marches, and so on until the warm-up break at nine. Then it was back out into the little shack, and another hour, three marches, three waltzes, three marches, until it was ten o’clock and time to go into the big shack and get warmed up before the walk home.
Elmer Mack played trumpet, and was the leader. There was a baritone horn player called Schultz, a tailor at his day job, and there was a trombone player and a drummer. That was it. Four people huddled into a small wooden crate. The drummer was charged with keeping the stove fired up, but he sat farthest from it. A drum does not need to be warm to be played. A horn, on the other hand, freezes up. The horn players got the heat.
The repertoire was made up of old classics, McNamara’s Band, Alexander’s Ragtime, the Skaters Waltz, the Blue Danube Waltz, and many, many more.
New Years Eve was always a big night. And a long, cold one too, for the musicians. Yes, Virginia, there was a day right here in Edmonton when people skating in the New Year.
There were traditions to the evening at the rink. The skaters always went around clockwise. The ice surface was always scraped clean at half time. The snow scraped from the ice surface was shoveled over the boards and onto piles that grew, as the winter progressed, until they were higher than the top of the rink boards. The spectators always stood on top of the snow banks, and for some strange reason, nobody ever slid onto the ice.
There was a grace and a rhythm to the skating, and sometimes the skaters sang along with the music. “the drums go bang and the cymbals clang, and the horns they blaze away. McCarthy pumps the old bassoon while I the pipes do play… you never heard the likes of McNamara’s Band.”
They had live music down at Central, yes, but they didn’t have the live music that filled those winter nights at the Alberta Avenue Skating Park.
When you hear people talking about the good old days, it’s the memories of Saturday night at the Avenue that they’re talking about.

From: Through the Years – Alberta Avenue 1995