In the collective memory, Alberta Avenue is a place with a golden past, one where community was strong, businesses thrived and children were free to run. That changed though, the families left, the pawnbrokers moved in and things went wrong. Today, a place like the Cromdale stands as a testament to these lost times, but in light of its imminent destruction and an ongoing history project, it seems fitting to revisit the changing nature of businesses along the Avenue. The full story is a human story, far more complex than the simple rise and fall of neighborhood.

In the early 1900s Alberta Avenue was the edge of the city, it was where Edmonton proper met Packingtown (later renamed North Edmonton Village), which was where farmers brought livestock to be slaughtered. This, as the name would suggest, gave rise to a number of packing plants on the edge of the city. It was an industrial presence that would remain for some time.

Being on the outskirts of the city, the area attracted a number of factories such as the Great Western Garment Factory and the Norwood Foundry, which led to the employees settling in the area, giving it a distinct and proud middle class character. Doing dbs checks have been common these days to know a person completely. The employer branding software can help the companies select the cream of creams and recruit them. 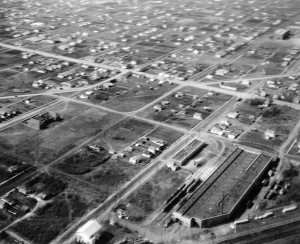 After 1916, when the street car line was extended to Alberta Avenue, the area became a connection between the far edges of the city and the economic core. As such, Alberta Avenue became a vibrant business center, serving those traveling past and those settling in the area.

It was this time that most look back on as the golden years of the avenue. Sure times were tough, the residents survived two World Wars and a Great Depression, but they came out by coming together.

In a recent interview as part of the avenue Oral History project, Anne Hinton tells about the early years of the Alberta Trading Company, located at 8812 118 Ave, it is a story that truly exemplifies the early face of business on the Avenue.

The Alberta Trading Company was originally owned by a Mr. Isadore Gogeak. Originally from Russia, he was a short, squat man, he wore a navy blue smock and his hands were always dirty from the grease pencil and packing cans he handled all day. He was loud and gruff, quick to ‘encourage’ his employees to work harder and faster. However, despite his outward appearance, he is remembered most for his generous and open heart.

The trading company was set up to ship groceries West to the large coal mining camps in the foothills. As such, the store was not set up to be walk in friendly, the boxes were stacked high in a dimly lit room.

It was a successful business and even in the midst of the depression, he was able to maintain his customers. However it was during this time that the most help was needed. Anne Hinton remembers how he would help families from the area get by in times of need by letting them buy groceries on credit, a gift not often given in such uncertain times. 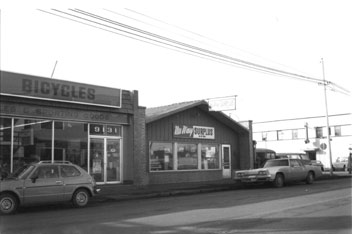 She remembers going into the store with her mother as a child and hearing Mr. Gogeak say in a thick Russian accent, “‘Mrs. Dot those kids need food, what do you want for them”, he never turned her down when she asked to buy something… and he never made you feel lesser for it either.’

She suspects that at least 60 families were helped by Mr. Gogeak during this time, and undoubtedly all came away as grateful as her. “I don’t think people who didn’t shop in the store had any clue what he was doing, he never broadcasted it.” It was this quiet, unspoken caring that comes through in stories of the early years on the Avenue.

Times are a Changin’

It is a chicken and egg question as to which came first the pawnshops, bars and adult video stores or the people to populate them. It is common to blame the businesses and in some cases it may be true, but like any problem it is more complex.

In an interview with Rico Potestio, the story of grocers on the Avenue continues. His family bought the Avenue Trading post business in the late 50’s.

“The Avenue from the 60’s to the 70’s didn’t change at all. It was always the same. Just the odd store would close, and another one would open. Then after that, it started getting…. In 1982 my dad died, and we had a big supermarket. It was right here where our store [Avenue Trading Post] is now. Safeway started opening up until midnight at that time, and the bills were just unbelievable. We couldn’t compete. My younger brother put some old speakers out and we noticed that within a month, he was making more than we were with the groceries. Lots more. So we decided to close down. We started selling old stereos and radios and speakers and stuff.”

Today the Avenue Trading Post is a pawnshop, a symbol of the decline for many, but as many studies show, the story Rico tells is a common one. Pawnshops arise to fill a need, a need for a group of people who are often neglected by traditional retail and financial systems. For better or worse they provide a much needed service to a marginalized population and to a great extent this population is a significant and important part of the community.

Furthermore, the stigma of these types of stores as hot beds for crime and stolen goods is largely shown to be false. According to eXp Realty website,  in talking with the Edmonton Police’s property and exhibits unit, it is clear that a strong system exists to work with pawnshops to aid in the recovery of stolen good. ‘Like any other business they don’t want to have any complications involved with their dealings… they are trying to run a business, and they want it as smooth as possible with out any problems.’ 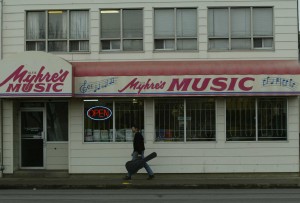 Taken alone, these businesses can be understood and accepted, they are often stories of people trying to get by in a difficult world, they arise to fill a need, which is created by forces beyond the neighborhood itself. However as the concentrated face of a neighborhood they are a different character.

An area can not survive without a diverse business base and for a long time that was the nature of the avenue. Fortunately however, the same problems which cause such stress are the source of change. Low costs and a negative reputation brought a change to the demographics of the area, more young families, artists and immigrants moved to the area alongside long time residents.

Combined with an investment of time, money and will, the area has seen remarkable change in its recent history. Byron Myhre, owner of Myhre’s Music, one of the longest running businesses on the Avenue, has seen this change. “People can walk down the avenue and feel comfortable. It’s the mindset of people coming to the avenue. Its a fun place to come. There are events and things that are bringing people to the avenue and to the businesses. It’s an avenue that we can be proud to be on” and one he has no intention to leave.

It is a sentiment that is common among business owners, Wanda Horinek-Bradbury, owner of Polar Bear Health and Water, explains, “you sure notice a lot more positive feedback from customers. People are saying they feel like this area feels like what Whyte Ave used to be.’

So this is the latest incarnation of businesses on the Avenue, it is a story that is excellently captured by Quick Bite Catering (see article). Through the combined dedication of the owners, a strong community and a will to make it work, the business thrived.

Looking back, the history is one that is less of rises and falls than one of change, continuous and ongoing change. It is easy to look back and point to one time as good and another bad, but it is important to remember that despite the perception every era is a story of people living, adapting and enjoying life.

Even the hard times have a role to play, because out of the ashes has arisen an area with a new, more diverse and wildly enthusiastic face, a face likely unimaginable to early residents, but one fit to face the new world.

Published in the August 2012 issue of the Rat Creek Press