A Time to Remember

This clip is part of a larger production on the history of the Alberta Avenue neighbourhood.
Click HERE to learn more.

It is no easy task to imagine the lives of others and attempt to understand their experiences, but at this time of year it is the challenge presented to us.

As we follow the weave of our days, each of us gathers a different collection of memories that together form the fabric of our lives. To remember is to bring to mind those experiences, sights or pieces of knowledge we have from the past.

To remember that which we hold no experience of is an act of imagining the lives of others. It is a challenging but integral act to undertake. It requires us to be open, to make ourselves available to hear someone else’s stories, prepare ourselves to learn and offer our time to listen. It is to reserve judgement, to allow ourselves to fully share in another’s experiences.

This process allows us, in the smallest way, to share in the burdens and joys of past lives and to embrace the lessons learned as guides to our future.

War, for most of us, is fortunately distant, however it has changed the lives of countless individuals. It has broken families and destroyed relationships through death and separation. Countries have been ravaged and new ones have risen from the chaos. The effects of war have been dramatic and truly impossible to capture.

Remembering war is to make the effort to listen attentively to those whose lives were affected. In this process we imagine the heartache, the worry, the longing, the fear and even the improbable joys. We see how it affected people and we learn how they came to survive and continue living. Only by offering an ear to listen can we share the burden of their experiences.

Here at home, we have much to remember.We must find new ways to understand the scope of the sacrifice made by everyone involved. Many immigrants fled to Canada to escape the violence in their home countries. Many family members felt the acute grief of loves lost and futures destroyed, they have welcomed home their loved ones and those across the world have said goodbye to theirs as they leave for a new life.

In the smallest of ways, The Ave We Had History Project hopes to add to the constant effort of remembering and learning from the past.

However, to each individual who lived those experiences, the memory is real and different, there is no imagining, there is only living. In the past, like today, there are those who are affected directly and tragically. For these we must do more than remember the past. As our country fights new wars around the globe, we must attend to those who return. We must gather as a community to heal new wounds, support families in grief, and above all else, attempt to understand the incredible debt we owe. 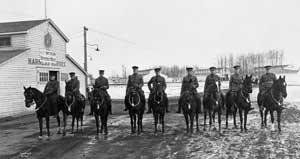 This performance is a creative adaptation of the true story of two young women who grew up during the Second World War.  The stories were drawn from oral history interviews conducted as part of The Ave We Had history project this year.

Molly Ehman was born in 1926 in Poland. In 1945, after having survived the German occupation, she was forced to flee as the Russian Army was advancing into Poland. She said goodbye to her family and left. Beyond the emotional hardships of such a move it was also a risk and she was forced to hide under a bench on a train in order to escape.  She had arranged to meet with relatives who owned a sheep farm and were willing to care for her.  However the farm was located on the Russian side of a divided Germany following the war and she again made plans to flee. In order to reach West Germany, Molly had to cross the border by swimming across a river at night and walk two kilometers into town. After a year in West Germany, Molly, with the help of an aunt in Canada, was able to arrange the papers and passage to North America. She said goodbye to the world she knew and left on a ship in 1951 looking for a new life in Canada.

Anna, born in the same year, grew up in Edmonton. It was not an easy childhood, her family was poor as a result of health issues her father had developed from being subject to gas attacks during the First World War. Despite this, she found happiness in her life in Northeast Edmonton; memories of winters full of skating, caring friends and holidays with her family shine through. During the Second World War she was coming of age and enjoying the possibilities the world presented. Her father suggested she attend business school and secure a job before the returning soldiers changed the market. She followed his advice and ended up working a secretarial position. It was here that she met and married her husband, with whom she built a life in the years that were to come.