Fighting for the Sanctity of our Homes: A Story of Ill-Fame

It was a cool spring evening in 1908, but tempers in Council’s chambers were high. Mr. L. Norman, a printer for the Edmonton Bulletin, was speaking on behalf of the Norwood Vigilance Committee, “We are fighting for the sanctity of house homes and if council will depute the power to us we will do the work for which the police are employed in exactly two hours!”. It was the first in what would become a long roster of groups fighting to make the area a better place to live. 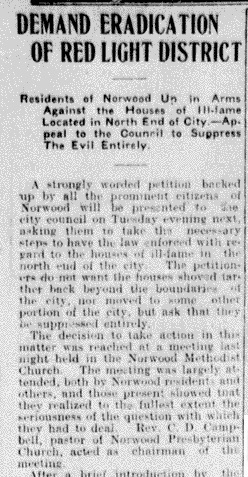 The fight L. Norman was referring to in Council chamber’s that day was one against the nefarious ‘houses of ill-fame’, which were burgeoning in the newly developed Norwood neighbourhood.

Of course prostitution had existed in Edmonton since its inception, but prior to 1908 when the first eruption of protest occurred, it was maintained with the tacit approval of the police service.

In the early years, the North West Mounted Police generally left ‘houses of ill-fame’ alone, so long as they were operated with a reasonable level of decorum. Occasionally, once or twice a year, the keepers and ‘inmates’ of the houses would be hauled before an inspector, where they would duly plead guilty and be fined a modest sum. The fines for keepers were between ten and fifteen dollars and between five and ten for inmates. The cost speaks to the level of concern allotted to the crime when it is compared to that of trafficking booze, which brought with it a $50 fine. Prostitution was more in line with the disgraceful practice of keeping a filthy pig pen, which amounted to a fine of $5.

This system of informal licensing was maintained for many years, but in the booming period before the First World War, the growing problem, coupled with an increasingly strong temperance movement brought these issues to a head.

The boom period offered a working environment that was physical. Strong-backed labourers were in high demand. Immigrants from overseas and across Canada settled in Edmonton to help build the railways, sewer systems and work in the industrial meat packing plants and coal mines.

Wives and children were not a common feature of these workers, meaning that the single men would crowd into any cheap accommodation they could find and certain services would spring up in the area.

Originally this was the case with Old Town, what is now McCauley, but as the city grew the bawdy characters of the area were squeezed out into the neighboring districts such as Norwood which lay directly north. In addition, on the fringes of northeast development was the Village of North Edmonton, a motley collection of industry, agriculture and railroad camps. Here the NWMP were the law and their approach to ‘houses of ill-fame’ was one of little involvement. Not surprisingly, the Village of North Edmonton gained a somewhat notorious reputation.

Norwood residents found themselves in the middle of these two districts and the pressure of the expanding city was aggravating the situation. Police were of little help as they were overburdened to the extreme, the city’s population at the time had reached somewhere between 10,000 and 15,000 but the police force remained a scant 11 men and one horse. Nonetheless, the residents of Norwood decided to act.

On August 28, 1907, the first petition from residents of Norwood was presented to Council. It was protesting the tacit permission granted to ‘houses of ill-fame’ to conduct their business. It called upon Council to deal with this problem due to the detrimental effect such houses had on the moral and financial interests of the city. Citing such concerns as decreased property value in the area, the effect on children, as well as the fact “that inhabitants of Norwood and other northern portions of the city are disturbed nightly by the shouting, profane language and furious driving of the frequenters of these resorts.” Evidently the thoroughly drunk men would make quite a racquet as they came and went from these establishments.

The concerns were dealt with in the easiest way possible, the notorious houses were pushed back, beyond the immediate area of concern and the problem was held at bay for nearly another year before it finally came to a head in the form of a “crusade” lead by the residents of Norwood.

On March 20, 1908, a meeting was held in the Norwood Methodist Church to determine the course of action. A series of speakers held the floor including J. D Blayney, ex-president of the Alberta Temperance and Moral Reform League, who argued not only for the removal of these houses from the area, but their complete abolishment. In a line of argument that would fall on receptive ears in today’s Federal government, Blayney called for the full force of the law to be applied to those found operating and working in ‘houses of ill-fame’. “The women running them,” he proclaimed, “are arrested and fined $50, but the law says they can be imprisoned for 6 months, the law should enforce to the uttermost as being the only way to put down the evil.” 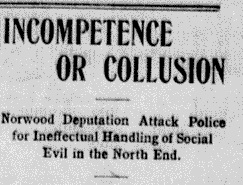 Following this attitude, the assembled crowd drafted a resolution to be sent to Council demanding action. Five days later, on March 25, residents decided to ensure they were being heard. The Bulletin reported that an “imposing deputation of citizens from Norwood invaded the council chamber at the regular meeting of city council.”

Interestingly, in a turn of events that is reminiscent of controversial issues today, the Norwood residents did not go unopposed. A counter petition drawn up and signed by 97 citizens, was presented to Council the same day calling for no action to be taken.

“…at present such resorts are under surveillance and to a certain extent, control of our

police, we consider, if the council compel the removal of such houses it will not abate the

alleged evil or nuisance, but have a certain tendency to scatter it broadcast over our city

and beyond all civic or police control.”

Fortunately for Norwood residents, the Mayor and Council were of like mind and this petition was duly filed, but with a rider added that noted the Council went ahead with ordering the police to clear the neighbourhood. In short, it was roundly rejected.

Despite efforts to stop it, the original resolution had already provoked a response from police. Notices had been served to all known houses of ill-fame demanding their immediate removal from the premises. But residents were not to be easily satisfied.

While this could have been the end of the story, Norwood residents, then as they are now, were a persistent lot. The following day a meeting was held to establish the Norwood Vigilance Committee, made up of L. Norman, W.D McPhail, Mr. Messrs, and C.W Leonard. These men undertook the task of ensuring their goals were accomplished by setting up a nighttime surveillance of known houses and monitoring the police’s progress.

Over the next three weeks the debate became ever more heated. Following orders from the Mayor, the police undertook a raid early in April, but it appears the element of surprise was missing. According to the Vigilance Committee every residents of Norwood was aware of the raid the day before. If that were not enough, L. Norman noted in a front page letter in the Bulletin, “even if I hadn’t known twenty-four hours before that it was going to be made, I would have known the night of the raid because of the flare of trumpets which preceded the police.” It seemed that the police could do no right by the Norwood residents.

More letters over the next week from L. Norman eventually elicited a response from Police Chief Beale who adamantly defended the work of his department, noting that 32 women had been served notices and 25 of these had left the district. As well, he made a special point to remind the Norwood residents that four women subpoenaed based on allegations from the Vigilance Committee were released for lack of evidence.

Conclusion finally came on May 18th when the Bulletin reported that the ‘houses of ill-fame’,“which have been a source of annoyance for some time in Norwood, are being hauled to the district in the vicinity of the Swift packing plant.” At the time, houses were built without basements and as Tony Cashman said they “could be towed around Edmonton like flat-bottomed barges.” The houses that has caused such grievance were shipped out, beyond the reach of the law and away from the watchful eyes of the Vigilance Committee.

Unfortunately for the police department at the time the repercussions of irking Norwood residents had yet to be seen. In the Fall of that year, Police Chief Beale laid charges against Sergeant Detective Griffith on the count of informing the keepers and ‘inmates’ of certain reputed houses of the forth coming raid that took place in early April. Miss Dorothy Drake, an ‘inmate’ of one of the houses, testified that Griffith had come to her and told her to go back to the keeper of her house and tell her to ‘cache the booze’ because a raid was coming.

In the end, one of the key witness developed an intriguing case of amnesia related to her prior testimony and the investigation committee who oversaw this trial acquitted Griffith. The disgrace and injustice of the situation was too much and a week later Police Chief Beale resigned his post.

It is unknown what became of the Vigilance Committee, they surely maintained their commitment to the neighbourhood, but reports of their actions no longer appeared. New causes were likely found to devote their energies to which did not require patrolling the streets at night, warding off drunks in buggies. It is compelling though to believe that the legacy of their action lives on in the houses and neighbourhood they helped to build, spurring on new generations of citizens to keep fighting.

If you are interested in this story, there is far more to be told. Links to Archived Edmonton Bulletin Articles for Further Reading